Endorsee: Death From Above 1979 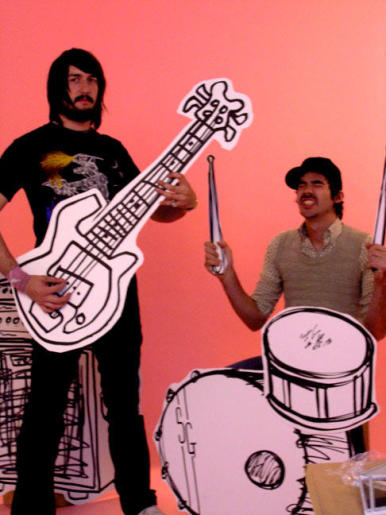 The first whispers of Death From Above 1979 occurred late last century when Jesse F. Keeler was busy playing punk rock music in Euro squats, while Sebastien Grainger took acid in Montreal then watched his friend Evan put on women’s clothing to the tune of Deep Purple’s In Rock and Andrew Lloyd Webber’s Jesus Christ Superstar, Original Cast Recording. Following a brief obsession with the technological apocalypse known as “Y2K,” the Western world started asking interesting questions again and these questions led to answers. These answers, in the Socratic style, were also questions; “Hey, What happened?” and “What is the internet, really?” These questions, in turn, were answered with yawns.

Then in June 2000, when everyone was still waking up from the dream/nightmare known as The Nineties, Jesse and Sebastien bumped shoulders while stretching out at a Sonic Youth show in Toronto. What followed was a brief yet fertile courtship; countless nights driving around Toronto listening to Robert Johnson and Mobb Deep, the Rolling Stones and Daft Punk-anything but “heavy music.” Soon, they found themselves behind their instruments, Jesse and Sebastien both playing hard and loud because it felt good. Their rehearsals were punctuated by absurdist conversation and post-adolescent shenanigans. At this time, “free beer” meant walking around a bar drinking the ends of other people’s bottles.

This age of innocence lasted roughly until the Canadian national holiday of All Hollow’s Eve in 2004, when our two heroes released their debut long-playing record, “You’re A Woman, I’m A Machine.” What followed was an inhumane amount of touring. Together in a battered baby blue van, they affectionately named “Vangina,” they sprouted up from the soil of hardcore and punk rock to the bright lights and smoke machines of the rock ‘n’ roll stage. Soon, tensions began to rumble beneath; a secret UFC-style battle of egos, alcohol and other famed indulgences. But the two spry bucks maintained solidarity and all frustration and explicit emotions were locked away in a blackened cast iron kettle in the pits of their bellies. One day, those two kettles screeched with the steam song of the industrial revolution, and thus, the band broke up. After that day, a force divided, the two men toiled in the fields of dance music and rock ‘n’ roll for five years without a word muttered between them.

For a time, that was the end.

In 2010, with a decade-long divide, Jesse and Sebastien met again, not unlike the first time. Their reunion was sparked by an overwhelming demand from an un-satiated public to see this force of humanity perform. In 2011, the narrative resumed with a year-long reunion tour that cemented not only their place in the current cultural landscape, but also their legend. The excitement of playing live again drove them to that old, Socratic Method that often leaves more questions than answers. Questions beget questions, and what came next is where we are: the present.

Its 10 years later and we’re still writing our own bios, still playing too loud and still punctuating it all with absurdity. In the fall of 2014, we will release our first record together in a decade. Our epic proposal, entitled “The Physical World” was written and recorded between 2012 and 2014 in some real life Rorschach test where the past and present are perfectly symmetrical and equally terrifying. We hope you enjoy.