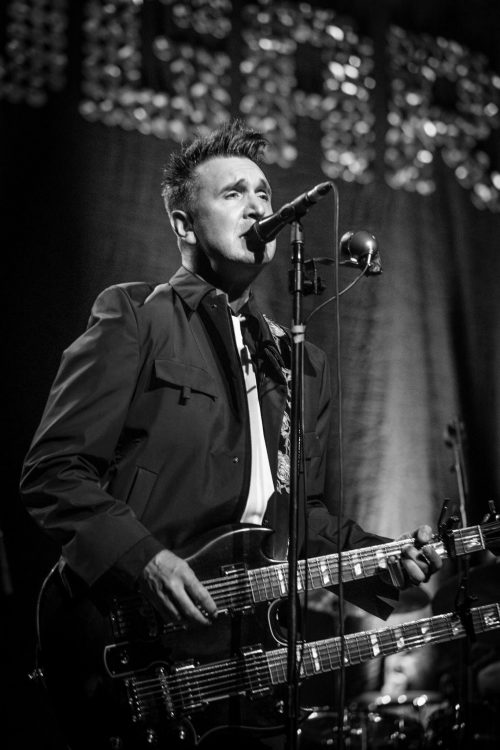 Big Sugar leader, Gordie Johnson, storms the stage with his signature double neck Gibson guitar, howling into the mic “Time to get back to the land of the living”. He may sing like a man possessed but he is a man sharing what it’s like to be blessed. After winning a long battle against his personal demons and riding a wave of renewed energy, Johnson and Big Sugar were slammed by band member defections, an aborted album, mental illness, addiction and even a life threatening illness. However…

Big Sugar boldly goes forth with their new album “ETERNITY NOW”. Johnson, at the controls of his Texas studio “THE SOUND SHACK”, applies his signature 1970s thump and otherworldly psycho-acoustic dub effects that have made him a much sought out remixer/producer. For the first time, there are no co-writers outside the band and the new lyrics ring true. Uplifting and full of resolve whilst addressing the realities of a hard life lived and survived; whether it’s the tale of redemption in “The Better It Gets” or the vow to his real life super hero in “Wonder Woman”.

There has always been magic flying between Johnson and his diverse troupe known worldwide as Big Sugar but this is a new kind of magic; a shiny alchemy that compliments their hard won transformation. He is joined by his long time reggae bassist Garry Lowe, drummer/multi-instrumentalist Chris Colepaugh and the languid Alex Johnson (Gordie’s sexy significant other) adding subliminal textures of percussive sound, along with new member Rey Arteaga, master of Afro Cuban rhythms on congas. Whether these 5 are performing brand new songs or their certified hits, the roots rock reggae groove is deep and Gordie Johnson’s guitar always tells a story.

Johnson’s vocals bear the scars of time yet emanate a vital musicality that recalls the young band that burst into the spotlight with the raging “Ride Like Hell” or their first radio hit “Diggin A Hole”. He explains that the new Big Sugar sings like a family, enabling them to create a sixth element with their powerful harmonies.

The leaner, cleaner, present day Big Sugar still rock the house to keep fans dancing and playing air guitar but whatever you thought this band was, let it go. The title of their first track “Anything is Possible” states it best.