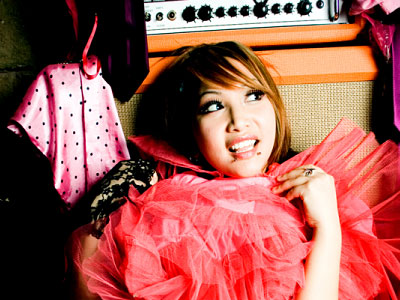 Kat Lucas is a singer-songwriter, multi-instrumentalist and session musician based in Toronto, Canada.  She currently sings lead vocals and plays keys and guitar in alternative/indie duo Toy Daggers.

Kat has built an extensive career as a touring musician over the years, most recently on the road with international pop star P!NK playing keys, guitar, and singing backing vocals in her band.  Since 2009, Kat has been a part of two international arena tours (“Funhouse” and “The Truth About Love” and a stadium tour in Europe and the UK (“Funhouse Carnival”).  Kat has made a number of TV appearances, such as Jimmy Kimmel, VH1 Storytellers, Ellen, and The Today Show, as well as awards shows like The American Music Awards and the MTV Video Music Awards.  She has also played at legendary festivals like Isle Of Wight and Hyde Park Wireless, and has been featured on Entertainment Tonight.  She was part of two live tour DVDs with P!NK, for the “Truth About Love” (which was nominated for a Grammy) and for “Funhouse”.  Besides P!NK, she has also worked with Canadian artists such as Lights and Ashley MacIsaac.

Kat is a prolific and passionate songwriter.  From writing a concerto called “Dreamcatcher” at age 14 to writing dance-pop tunes for Japanese pop star Kumi Koda, she thrives on all types of music.

Her musical journey began when she was just three years old, and she has spent her lifetime as a devoted student to her craft.  She hopes to share the gift of music with as many people as possible, and believes that music has the power to heal, uplift, and inspire in ways that nothing else can.