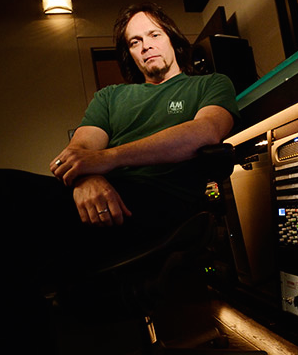 If you’ve been enjoying the recent releases of Rush and Dream Theater, a driving force behind the sound of those projects is one of the hottest engineers around today: Rich Chycki. Richard is an engineer and mixer whose clients include such rock royalty as Rush, Aerosmith, Dream Theater, Def Leppard, Mick Jagger and Skillet!

Chycki has an uncanny knack for making rock tracks both hard-hitting and hit-radio-friendly. “I’m a music fan, first and foremost,” he says. “I have to be drawn to the personae, the songs, the sound and the excitement. Good music is good music, regardless of genre.”

At last count, Chycki has earned upwards of 75 gold and platinum sales awards worldwide.Rich Chycki began his engineering journey as a guitar player, working in studios in Toronto, Canada. He relocated to Los Angeles, recording and mixing in some of the world’s finest studios like Ocean Way, Henson, Capitol, The Record Plant, and in London’s Power Station Studios. He subsequently added artists like Pink, Seal, Shawn Colvin and Dolores O’Riordan from The Cranberries to his resume. While he uses Toronto as his home base, Chycki’s client list centers in the USA and Europe.

Known for his pioneering mix work in 5.1 surround, prog icons Rush entrusted Chycki to remix the multimillion selling 2112, their career pinnacle Moving Pictures, as well as A Farewell To Kings, Signals, Snakes & Arrows and Fly By Night in surround. In fact, 24 of Rush’s last 26 gold and platinum sales awards in North America over the past 9 years have been awarded to him in appreciation of his surround mix work on their live DVDs. While rock acts Dream Theater, Skillet, Simple Plan and Our Lady Peace have also tapped his surround mix talents, other genres have caught word, most notably for DVD releases with P. Diddy/Tyrese/Shaggy and Sean Paul.

Richard’s approach to album-making scores strong support from the artists. In a recent interview John Petrucci, Dream Theater says, “He’s got a great attitude; he’s hysterically funny, so there was a light atmosphere in the studio … and I think that contributed to the kind of album that came out …” He adds, “He has so much experience as a producer and an engineer and mixer … he worked harder than I’ve ever seen anyone work in the studio.”

On working with engineer Richard Chycki, Rush’s Alex Lifeson has said, “Rich is very settled in with the way that he hears the band …. [He] is such a great engineer.” And Neil Peart has said, “I have never enjoyed the recording process so much, nor been so satisfied with the results.”