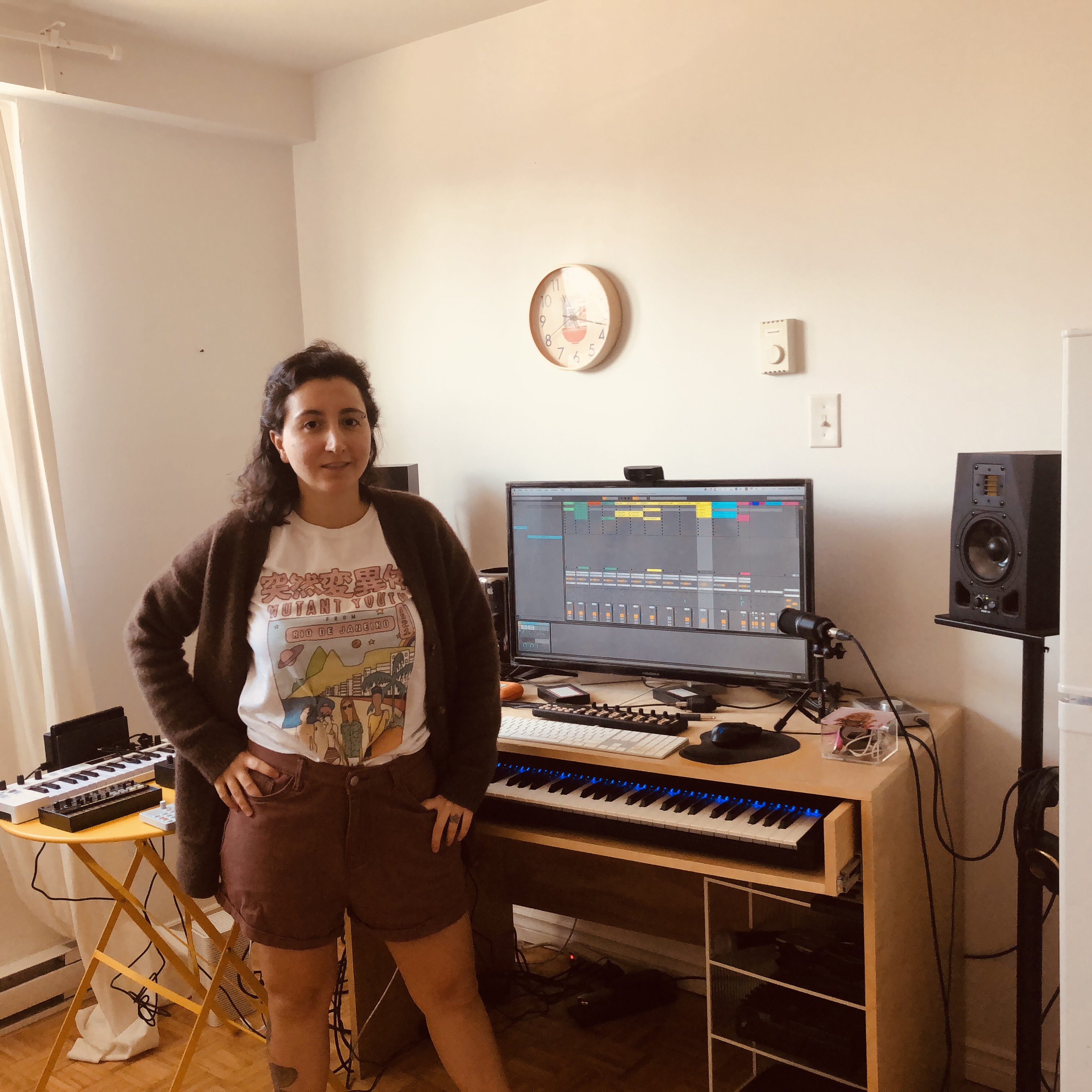 Bettina Calmon is a Composer, Music Editor and Audio Designer. Originally from Brazil, Bettina is now based in Toronto. We “sat down” via email to ask Bettina about her career, methodologies and gear choices.

1)  How did you start making music? What is your motivation?

I started at the age of 14 learning to play guitar and then drums, I had many bands until I put together my home studio and learned how to record, produce and mix. I really enjoyed that experience of doing a piece of music from scratch on my own, that’s when I decided to make a living as a composer and audio person in general. What keeps me going is the challenge really. On a personal level, I had to overcome my fears, the fear of exposure for instance, because once your work it’s out there you have to exercise “letting things go”. Besides that as a shy person I had to improve a lot of my socialization skills in order to get to work with what I like and that made me grow as a person.

2)  Please give us a short description of your studio. When has it been founded? Is it built with a special purpose in mind (music genre)?

First I had a studio in my room, at my parent’s house. Then I moved to live by myself and made a studio in my house in Brazil. Today, I live in Toronto and I also keep my studio in my living room. Mostly I am composing, designing sounds, and mixing my own work. So acoustics for recording it’s not my main concern, of course, it is important in terms of mixing but I’m just generally used to checking my mix in headphones as well and trying to minimize the ambient effects. Overall I have a good enough space and I feel comfortable at home which is also important.

3)  How do you work at your studio? For example, do you have several work stations, recording and control rooms?

I keep my studio very simple, I use a Mac Pro as my main station, I have Logic and many third-party plug-ins and libraries installed. Besides that I have some External Synths, I specifically love the Op1 and the Digitone. I connect what I need to the Duet input and the output goes to my ADAM Audio speakers.

4) What projects are you currently working on?

I’m working as an audio designer and composer in a Game Company called Behold Studios: https://www.beholdstudios.com.br/

We should be releasing a new project next year. And I also been doing some freelancing for small game projects from brazil.

5) What have been your most popular/well-known projects so far?

I’ve worked in Brazil as a composer for some tv shows that were released on FOX and HBO, and I did many game projects in Brazil but so far I think I’m still working on getting more popular. (Lol)

6) What do you think makes your studio the ideal working space?

Having everything that I need in handy, knowing well my main tools, it’s comfortable I don’t need to drive somewhere, I just wake up and I’m there. Haha. Hy table was made specially for my studio, it’s simple but I love it, it allows me to have my keyboard in front of me, I hated to turn to the side for playing it before.

7) Speaking of monitoring, which problems have you encountered the most in your studio career?

That’s its trick because mixing in my opinion it’s an ongoing learning path. You are always improving. Having poor monitors or a bad environment will make a big impact on your final result. But once you get a good idea on how things should sound in a good enough space that gets easier. For me, checking my mix on good headphones helps and also having some time to rest my ear before deciding on a final mix, that will give me time to identify problems.

8) What makes the perfect studio monitor for you? Which features and qualities are important for you when it comes to monitoring?

Monitors that don’t suppress the most relevant frequencies or boost them. I know the monitor is good when I listen on different devices and I don’t feel a major transformation on the track.

10) Which were the reasons for you to choose ADAM Audio for your studio?

It is a brand that is well known among audio professionals and it has a good connotation. Also, I would like to emphasize that the assistance for them when you need it, it’s impeccable.

11) Do your clients occasionally comment on the sound of your ADAM Audio monitors? To what extent do you think they influence your clients evaluating their musical material?

If it was possible for them to come to listen at my studio they would approve the work immediately. But as I work in a long-distance situation many times I just have to pray for them not to listen on their cellphones or cheap headphone. LOL.