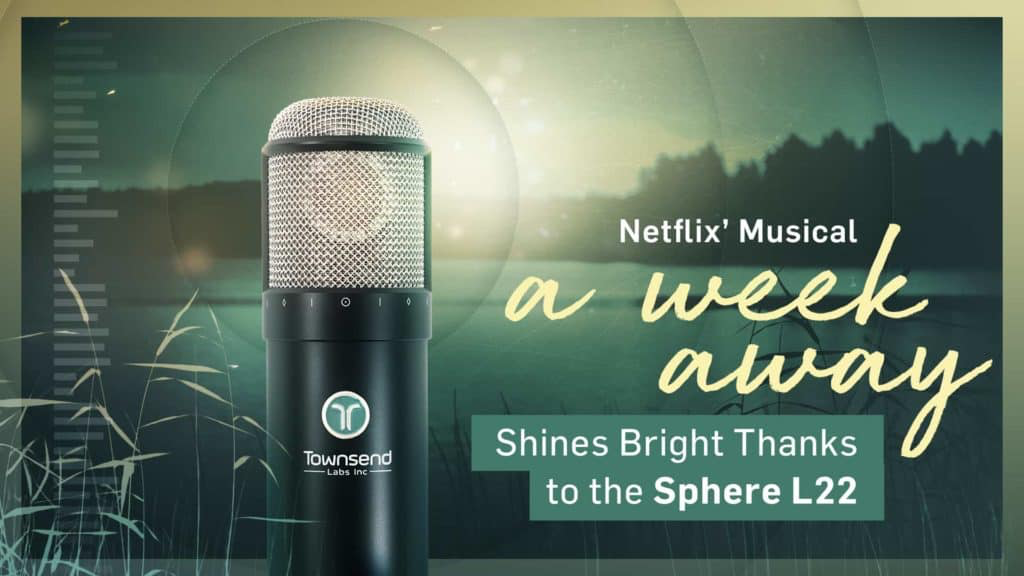 A Week Away, an upbeat musical released March 26 on Netflix, hit the Top Ten for the streaming service in multiple countries, and saw its soundtrack album rocket to #1 on the iTunes Christian charts and #16 overall. Nearly all of the film’s incredible vocals were recorded on the set during filming, and the results easily rivaled those of professional studios – all thanks to the Townsend Labs Sphere L22 microphone.

The film’s Executive Music Producer is Adam Watts, a critically-acclaimed record producer, songwriter, solo artist, and multi-instrumentalist whose portfolio includes Switchfoot, Demi Levato, Jeremy Camp, and Kelly Clarkson. Tasked with producing, engineering, mixing, and mastering all of the music for the film, Watts needed a flexible, reliable way to record world-class vocals under less-than-optimal recording conditions and on a demanding production schedule, and Sphere’s microphone modeling technology came to the rescue.

No mic locker? No studio? No time? Absolutely no problem!

Production of the film’s music began in early 2019 and then moved forward quickly with Watts, co-producer Cory Clark, and the film’s creator/producer Alan Powell teaming up, both in the studio and on set. The early demo vocal recordings had to be matched and improved upon, in an improvised studio on location in Nashville, TN.

This workflow meant that a pro studio’s usual tools – a large mic locker and quick access to a diverse selection of top-flight recording equipment – weren’t available. Just as critically, there was no time to completely reconfigure the recording rig to suit the needs of every new singer, including swapping and testing multiple mics.

Fortunately, the Sphere L22 meant that none of those things were necessary. Trying different polar patterns, vintage mic sounds, and otherwise-impossible blends of classic tones took only moments and didn’t even require touching the mic itself.

“We had to record five different actor-singers in a studio we had built on set, so the Sphere’s modeling technology was the perfect solution given our tight schedule and multiple singers. I didn’t want to sacrifice anything sonically, but I didn’t have time to use a variety of microphones. With the L22, I could record everyone with the same exact signal chain on every song, and then pick which mic model worked for each song later. Super cool! It’s really the perfect microphone for this kind of situation.”

Lead actress Bailee Madison had recorded her demo vocals on a Shure SM7b. For the final production, these vocals were replaced with new takes tracked on the Sphere L22 and its DN-7 model.

In the production trenches

Work on the music included two intense weeks of non-stop vocal production. Working onsite meant that a single well-chosen recording path would have to do the job, so Watts set up a high-end analog chain to match the Sphere L22’s top-quality sound: a pair of Neve 1073 preamps into a Shadow Hills Dual Vandergraph compressor, direct to Burl Audio converters and into Pro Tools.

Back in Southern California, Watts mixed the songs at his personal studio full of high-end gear, taking advantage of the fact that the recorded tracks could be altered and even set to new models after the fact – something impossible with conventional mics.

Executive music producer Adam Watts at his LA studio where he mixed the music to Netflix’ new musical A Week Away.

Watts is quick to credit the Sphere L22 for the smooth and great-sounding recording process:

“There’s no better way to move quickly between each actor/singer and have the ability to choose the perfect mic model for each. Before I had the L22, most of the demos of the songs had been recorded on my vintage U47, but we had tracked the demo vocals for “Good Enough” on a real Shure SM7b. When we redid the vocals for the film, I had our lead, Bailee Madison, monitoring through the LD-47K model with a touch of 251. But when I switched it to the SM7b model, she basically went, “Ooh! I like that! Yes!”. She’d been used to hearing the demo vocal tone, so when I switched the SM7b model on the L22, she totally heard that it was the sound.”“The vocals on that song are almost like sung dialog, so the non-hyped yet in-your-face sound of the SM7b model was just right for that sort of thing. On its own, the U47 would sound ‘better’ to most ears, but in the context of the full song, the SM7b model was the clear winner. It’s so cool to have that kind of flexibility with the Townsend mic!”

The Sphere L22 is featured on the lead vocals of all but one song (“Let’s Go Make a Memory”, which required remote recording during post-production). Watts is particularly proud of the vocals on the song “Dive”: “The vocals sound killer. That’s the LD-47K on the first singer, then the 251 on the guys in the second verse.”

A Week Away stars Kevin Quinn and Bailee Madison, and features reimagined contemporary Christian hits by Amy Grant, Michael W. Smith, Steven Curtis Chapman, For King and Country, and Audio Adrenaline, as well as four original songs by Adam Watts, Cory Clark, Alan Powell, and Andy Dodd (on “Where I Belong”). The film is streaming on Netflix and the soundtrack is available on all digital platforms right now, so you can check out the vocals yourself.

In the end, Watts has one final comment about the Sphere L22 and its ability to turn a tiny makeshift studio into a chart-topping hit album:

“I own a vintage U47 and a bunch of other great mics, but when it came time to fly across the country and work on the vocals for this movie, the Sphere L22 was the clear choice for so many reasons, sonically and practically. I’m grateful this mic exists!”

About the Sphere L22

Since its debut in 2016, the Townsend Labs Sphere L22 has established itself as the best microphone modeling solution. Its pioneering multi-dimensional modeling technology and unique dual-channel design take microphone modeling far beyond merely mimicking the static on-axis response of the original microphones.

The Sphere L22 system consists of a dedicated dual-channel microphone and its software counterpart, the Sphere plug-in. The exacting models incorporate transient response, harmonics, proximity effect, and multi-dimensional polar response. Thanks to Townsend Labs’ exhaustive and curated study of classic microphones, the Sphere system currently brings the soul of 34 of the world’s most revered microphones to life. The striking sonic results have made believers of seasoned industry veterans such as Joe Chiccarelli, Billy Bush, and Allen Sides, as well as countless home and small-studio recordists.

All third party product names are trademarks of their respective owners, which are in no way associated or affiliated with Townsend Labs Inc. These product names and descriptions are provided for the sole purpose of identifying the specific products that can be used with Sphere and the IsoSphere feature.
Posted in Blog, Interviews, News | Leave a comment